When Adam came to visit we had already decided we were going to go to Andorra because I’d found the Tourist Information App that showed loads of different outdoor activity spots.

It was however a longer drive to Toulouse Airport than I had envisaged so we wanted to do more than we had time for- it’s definitely on my list for a return visit!

Desperate to not just drive all day after picking Adam up, we went to a climbing spot near Auzat (Massif du Montcalm) . There seemed to have been a pro cycling race on as there were loads of team cars coming the other way. The sport routes we found were really easy to get to once we were parked in the right place and they were handily all labelled. But we only managed to get one climb in each before it started to rain. So we carried on West.

That evening the rain seemed to stop or we drove out of it, and had dinner overlooking the valley near Ax-le-Thermes. Eventually we actually made it to Andorra, driving the mountain pass at dusk. It was so eary as you could see by the reflected light on the snow, but it was really dark clouds overhead. We decided to park up at a car park for a reservoir, up the side of a mountain. Hoping that we wouldn’t be moved on.

The next morning we had a look at the sign for the car park and realised that there was another further up the hill that was closer to the reservoir. It seemed like it was set up a little bit for tourists, so we moved the van thinking we could at least find a bench for breakfast.

Getting up there, we found ourselves finally out of the shade of the mountain, near a stunning reservoir. It was like we had walked into an Alpen advert – a perfect spot for breakfast! We didn’t really have a plan for the weekend so we headed to a supermarket for the toilets, buying food for the next day or so, and a much needed coffee. French supermarkets always amaze me with all the random but vast ranges they have. this time I picked up a pair of low level crampons for €11. Having looked through my National Parks book, I was keen to go to Sant Maurici National Park so we set off on another 2 hours drive to get there.

The road in Spain on the way there was absolutely stunning! Unfortunately there are not many passing places so getting any pictures of the scenery was difficult, but it was epic enough for the majority of traffic on it to be Motorcyclists. We did see one guy on a road bike but his calves were beastly, I know I wouldn’t have the stamina to deal with that incline for such a long way!

We arrived at the Park in time for lunch and came up with a plan for the day based on the leaflet we were given on entry. We would walk past the reservoir to the lake and back down in a nice big loop. We could see snow on the surrounding mountains, but were pretty sure our route stayed in the valley and therefore would be totally fine. How wrong we were!

After the first reservoir, where we had stopped for pictures, we set off up to the waterfall and then up to the next reservoir, when we came across the snowline. In most places the snowline sneaks up on your gradually, a patch here and there that gets thicker and thicker until you’re in proper snow, but here we could literally trip over the line. It looked like someone had cleared the road, pushing all the snow into a big mound and my first thought was that we could just walk round it, until I looked up enough to see that it didn’t stop!

I wanted to see the lake that the map said was just around the corner, so we trudged on, the snow making it seem like a magical mythical land in the sunshine. I was beginning to feel pretty unprepared when we saw people coming the opposite way with snowshoes, and having been shamed into not bringing my crampons, but the ground was reasonably well compacted and apart from a few slidey places, wasn’t too bad in our hiking boots.

As we carried on up round the corner, to what was due to be the pinnacle of our walk, the sky started to cloud over so the magic was gone and while still beautiful, our hike turned into a slightly more serious mountain adventure. We came to a sign post tat pointed straight down a steep slope and the footprints we had been following ran out. I felt particularly uncomfortable not having a proper map (OS maps style) but just the park map that assumed you could see the trail. This was the point we should have turned back, like all the sensible people before us, but where is the adventure in that, so we heel kicked and skidded our way down the slope to see if we could see the next signpost or other trail markers, a little further round the corner.

After an hour of scrambling over what was effectively a boulder field on the side of a mountain, going round in circles as we saw a viewpoint but still couldn’t see the path from it, until the other side of the river, and not really wanting to try and cross a river in spring when we couldn’t spot the bridge to aim for, we eventually turned round and returned the way we came.

While it felt like a failure, there was definitely a sense that it was going to rain soon, it was getting pretty late and we didn’t want to get injured. So I think we (finally) made the right decision in the circumstances. On the way back down (we took the 4×4 track to speed up the decent) we discussed what we did wrong and expressed at what point we would have turned around if each of us had been alone. I would have turned back at the top of the steep slope, and Adam would have turned back before the boulder field, but somehow as we had each other we wound up going further than either of us were really comfortable with, despite limited additional rescueability. I felt reassured that we were able to have that conversation without blame, another reason that boy is awesome!

The next day we bought Via Ferrata lanyards and headed up to a route not far from Andorra de la Vella so I could lose my Via Ferrata virginity. It was a lovely little route that took about an hour and a half. About half way up I mentioned that I was suprised that it had been classed as a medium when everything so far had just been an assisted scramble, so inevitably we then came across a inverted ladder section which cleared that up immediately! I really enjoyed the route and became super keen to give another route a go in the near future.

I loved how easy the route was to find, signposted from the main road and with big information boards to clarify the safety requirements and all the restraints and rungs were all in really good condition. 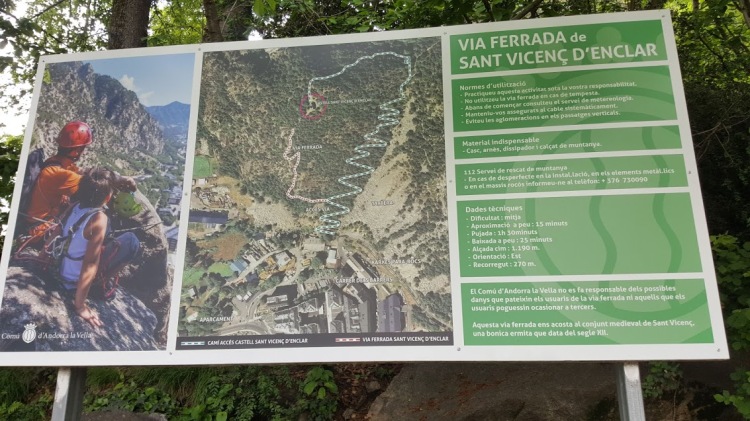 Because of the long drive, and because it now decided to piss it down with rain, we decided after that to start heading back into France to make the drive on Monday shorter and stopped at Aix-le-Bains for a spa trip in the famous thermal baths there. It was quite a small spa, and there were quite a lot of children around (it was clothed) but it was nice to unwind a bit as my back does get tight from sleeping in the van.

Having stayed in a nearby campsite for the night to make sure we were clean and not too smelly, I returned Adam to Toulouse Airport for his flight home the next day.

Unfortunately the SD card that had my good pictures on for this section of the trip has been corrupted and I haven’t been able to recover it yet. I will update with better pictures in the future if I can.