The most amazing wildlife and scenery!

This was the first solo trip outside of Europe so was a little nervous when I set out, but then the practicalities of getting yourself where you need to be on time for flights distracted me enough that I didn’t really think about it until I was on the plane. I flew using United via Newark and was a little worried that the hour and a half layover wasn’t going to be enough. Luckily the queues weren’t that bad and got through ok, however I read the time on the gate as the boarding time not the flight time so nearly missed my onward journey to San Jose. Thanks to the staff for still letting me on!

At San Jose it was 10pm and there was a wave of humid that hit as you got off the air conditioned plane. The queue for customs was really long and my bag was really heavy especially having broken my rib snowboarding a couple of week earlier (see Serre Chevalier). Having got through that there was no one at the Alamo desk (car hire) but eventually they showed and I got on a  bus to the hire place.

One thing you should know if you are planning on hiring a car in Costa Rica, your quote on the website is for the hire. There is a massive deposit! For mine it was $2500, but as long as you return the car in one piece this never comes out of your account, you just need to be aware and prepared and to have a card that won’t get cancelled when you put that on! I had this map (here) that was pretty good and shows where you can do cool stuff, but it’s hard to read a map and drive at the same time and if you’re not 100% sure where you are a satnav is really handy. What is less handy is that it doesn’t have everywhere in it especially if you’re heading off the beaten path so you need to be a bit creative with your input instructions. Also I had anticipated the car having a load cover, but it didn’t. All the advice I found online before I headed out was to not leave big bags in the car, but I obviously didn’t have a choice because I was staying in each place maybe 2 nights tops. So what I did is squish my bag down the footwell behind the passenger seat and recline the seat really far back so that from the window all you could see was shadow, and then put a bottle of water between the seats so it wasn’t obvious from the front that there was a bag back there either. I also left loads of rubbish and carried bags in the boot so it didn’t look like there was anything valuable in there either (even though there was). Didn’t get broken into so i guess it worked!

I woke up to it raining really heavily so had a lie in, but still left the hostel at around 8.30am. The sun was already really hot! First things first was to get myself to a shop to buy water and breakfast. Found a great little supermarket I have never seen apples so huge! What is surprising though when in the UK at least Central America has a semi-developed reputation, but it is not cheap! Some things are cheaper than others but food and activities not that far off European holiday prices (until you converted the dollar to pounds and it didn’t actually end up too bad).

So this post is going to end up really long at this rate so maybe I’ll bullet point what I did so it doesn’t get too rambly:

Day 1: Irazu Volcano. It’s a weekend so everyone is out having a good time. On the drive there were loads of trees in bloom which was pretty, but i was surprised at how many cyclists there were given it wa so hot! The road up the volcano was surprising newly resurfaced so was really smooth, pretty sure I went past a guy who was waiting for a gap in the traffic to longboard down it! There was a village part way up where there was a football tournament on but they were above the clouds which looked awesome. On the road where there had been landslips instead of fixing it there were just signs so you could drive round it. driving in the dark could be pretty perilous! There was quite a long queue for the national park entrance, so the local were trying to sell their food/ knitted hats(?!) etc. Being above the cloud the view wasn’t as spectacular as I guess it could be but it was very impressive crater. The water in one crater was warm enough to be creating it’s own cloud which was atmospheric and where you were walking was like being on the moon.($15 entry + c1100 parking) 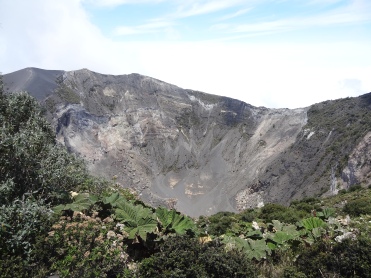 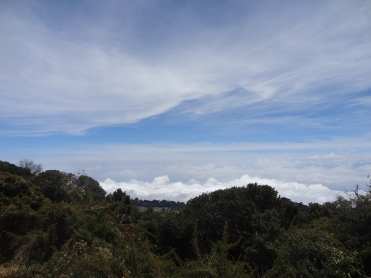 Day 2: Eaten to death by Mosquitos in the night in Turrialba. I had been planning on going white water rafting on the River here but I couldn’t work out where to go to do that, so I went straight to Cahuito National Park. I went for a walk through the park for a little while before coming back in time for a snorkelling tour (you can’t snorkel in the national park without a tour guide). It was 5pm by the time that finished so then it was straight to the hostel in Puerto Vijeuo for the night.($32 for snorkelling, Park entry is voluntary donation) 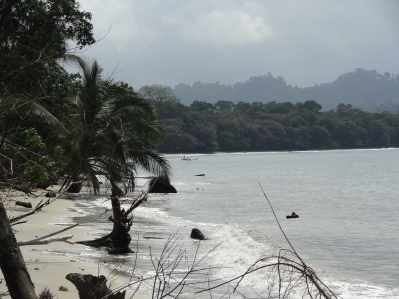 Day 3: Wandered around the town with a couple of girls I met at the hostel before driving up to Tortuguero. Note to get there is tricky and you will need cash! I used this information to get me there, but I still wasn’t confident so stopped at a shop to ask on the way. Trust the instructions, it’s really far! On the boat from La Pavona was like cruising into Jurrasic Park, it was so different to any landscape I had yet experienced. Being the end of the dry season the river was really low so the driver was struggling a little to get the prop in the water enough to keep us going, in all the ride took about an hour and a half. Tortuguero is a mangrove jungle that has no roads and is basically only there for the purpose of tourists and scientists. You can walk in the national park, but the best way is by boat.I took a walking night tour and saw loads of cool animals that Costa Rica is famous for that I definitely wouldn’t have spotted without a guide, including the elusive armadillo. I had been rushed to catch the next boat which was late rather than waiting for the next one so I manage to forget my walking boots and headtorch which would have been really handy for the night tour. You can hire wellys though for $1 so it wasn’t the end of the world.

Day 4: Woke up early for a canoe tour which was awesome, saw so many cool birds and lizards and right at the end loads of monkeys! At one point we were apparently looking at a sloth but I wasn’t convinced that it wasn’t just a bushy outcrop somewhere up at the top of the tree. I even spotted a turtle even though it wasn’t turtle season. I got a ride in a local boat back to the mainland and because it rained really heavy at first loads of creatures came out to dry off and warm up, we saw so many crocodiles! It was good to see that the local teenagers were so excited about the crocs even though they must see them all the time.

Day 5: La Fortuna, finally went to a Soda for food and it was really yummy. Today I went for a hike on the lava flows of Arenal volcano with a couple of canadians that I met in the hostel and then we went to a butterfly conservatoire. Butterflies so much easier to spot when theres loads of them!