I had 2 weeks of holiday to use up before the end of my work leave year at the end of march, but what should I do with it?

I had hoped to go to Spain and learn to paraglide, but as my wrist was still a bit feeble after damaging the bone while in Whistler at Christmas, I couldn’t commit to it.

So I decided to walk the Pembrokeshire Coastal path with full camping gear, on my own. 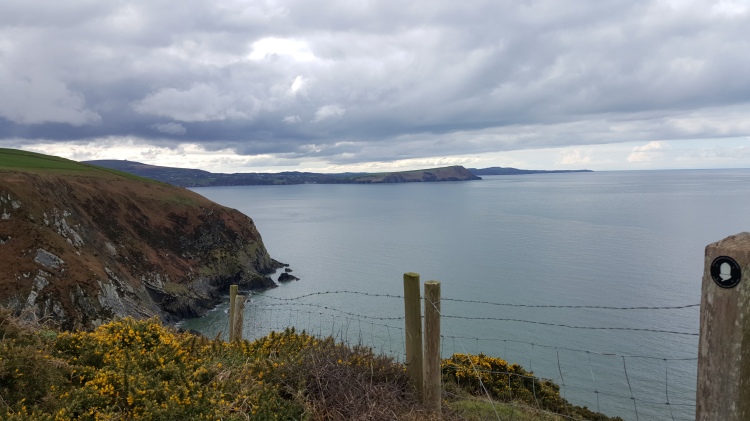 Now this is a proper challenge, for which I had done no training, thinking it would just be a nice 10 day walk and wild camp that would be a touch harder due to weather, terrain and weight; but on day 2 I had had enough and went home.

Im generally a bit of a tortoise but get to the end eventually, so what was it about this trip that made me give up so easily?

1. The goal was a bit arbitary: I didnt want it enough basically.  It was something to do to fill the time and would have been cool to say I’d done it but I actually wasnt’t driven by finishing it.

2. I was solo, so I wasnt letting anyone else down by not achieveing the goal. Turns out this is a big motivator for me.

3. Had I done it as a series of day trips with a day bag, I might have finished it. I had really struggled to get my bag correctly adjusted, especially as I was having to change layers so often, so found the weight was entirely on my shoulders instead of on my hips, which obviously led to a bad back and neck.

4. Conditions. Overall the conditions were pretty good, it wasn’t that rainy, and I was well prepated for rain, but what I hadn’t factored in was the effect of the weather on the path, or the proximity of the path to the cliff edge. This led to me scaring myslef silly when I slid, having mental images of me slipping just enough to start sliding down the slope, with nothing available to stop me going straight over the cliff.

5. Fuel. I really struggle to eat within an hour or so of excersise, so when doing a whole day challenge, making sure I’m actually eating something is something I really needed to keep a better eye on. In the 2 days, I had a pub lunch before I started, a couple of cereal bars, another cereal bar for breakfast the next day, 10am stop for pasta and a couple more cereal bars before I stopped at the end of the second day, it also turned out I had drunk a pittiful half a litre in the first afternoon. It’s no wonder I was tired and had a sense of humour failure! In future I think this is something I’ll have to plan in, like having an alarm every 30mins to remind me to eat and drink.

When I first got on the bus home I was really annoyed with myself. Part of me felt like a fraud, claiming to be an outdoorsy tough girl but actually I cant even camp for a week without my usual gang of guys to tag along with. Part of me had wanted to prove that I could, despite no-one having questioned my abilities in the first place.

Having posted on the tough girl facebook group, there were some really helpful responses on how to get over failure. My favourite being a quote

Which helps put decisions into perspective and makes me certain that I made the right choice. The other main theme was around turning the experience into a learning opportunity, which I have tried to do by organising my thoughts while writing this post.

What I realise now is that I just need to select my challenges more wisely. Do things because I actually want to do them not because of the kudos I hope an activity will bring. When you’re driven by your goal, you are willing to put up with a higher level of discomfort and fatigue than you are if you’re not that bothered, so its pretty pivotal to pushing through a challenging goal.

So for the rest of the 2 weeks I did lots of other things instead, couple of shopping trips, made a dress, first open water swim and paddleboarding all of which were really fun, and while less challenging physically,  I still had a bit of muscle soreness. I think I maybe need to work on my fitness a bit!

What are your thoughts in failure and what did you learn when you did?