Today we went on a paddleboard adventure to christen my partner’s new board.

As the Tamar Valley is the AONB, we figured that the best way to see it would be from the water.

The estuary comes out at Plymouth, and there was a train line up the valley, so we started planning purely based on the logistics of getting from one end to the other for either if we did the whole trip by train or if we parked and had to get back.

Due to the train times, and to save a bit of money we decided not to stay overnight in Plymouth and instead opted to drive to the start point and get the train back. This gave us two options, there were stations at Gunnislake and Calstock within walking distance to the river, but there was a weir at Gunnislake which increased the walk time. We then discovered gopaddle.com which has loads of information about navigable waterways for canoeing and kayaking which provided loads of useful information about where the slipways were. Unfortunately, this also stated that there is no public access to the river below the weir at Gunnislake because it was a fishery. So we opted to go in at Calstock.

This meant that for the most part we paddled the estuary end of the river rather than the steeper valley sections, but I think this just means we need to come back again! 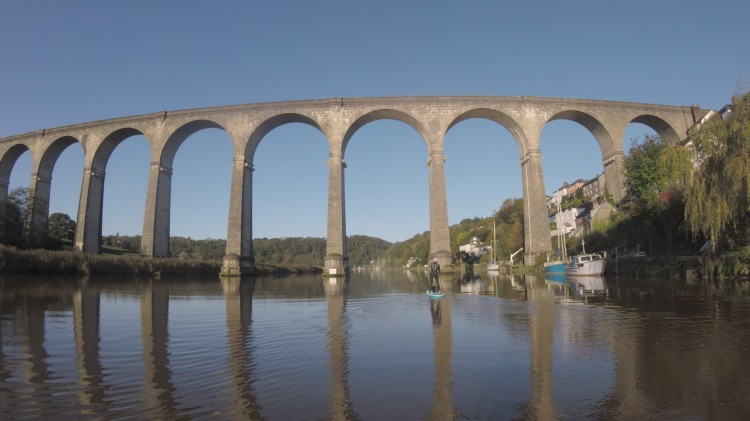 We had a beautiful day for it (its 20th October), glorious sunshine and good tide tides but for the most part we had the entire river to ourselves. There is a section upstream of Weir Quay that was pretty hard work at there was a bit of northerly wind, but otherwise we had all the elements in our favour. We started pretty early in the day hoping to get to Saltash before mid-tide when the current would be strongest, as we had been warned about the currents past Tor Point and weren’t sure how far upstream this would effect.

As we rounded the final corner we could see the magnificent Brunel Bridge and were in great spirits, thinking that it hadn’t taken us long enough and we should carry on to Plymouth Harbour because we had had such a good time, however that final stretch is way longer than it looks! At this point you also have the confluence of 3 rivers as it narrows under the bridge so we made the call to pull in at the slipway to reassess and decided to call it a day on a high rather than risk it all going wrong.

Having landed on the eastern bank, we didn’t need to get the train all the way back to Plymouth central and could instead get a drink at the local pub before getting a direct train back up the Valley Line.